"I expected to meet in the author a composite of the heroes of his novels. Instead, in 1957, at his home Finca Vigía, near Havana, I found a man of peculiar gentleness, the shyest man I ever photographed - a man cruelly battered by life, but seemingly invincible. He was still suffering from the effects of a plane accident that occurred during his fourth safari to Africa. I had gone the evening before to La Floridita, Hemingway’s favorite bar,  to do my “homework” and sample his favorite concoction, the daiquiri. But one can be overprepared! When, at nine the next morning, Hemingway called from the kitchen, “What will you have to drink?” my reply was, I thought, letter-perfect: “Daiquiri, sir.” “Good God, Karsh,” Hemingway remonstrated, “at this hour of the day!” - Yousuf Karsh 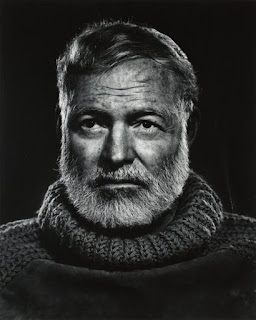 My note : Daiquirí was one of the favorite drinks of Ernest Hemingway and President John F. Kennedy.