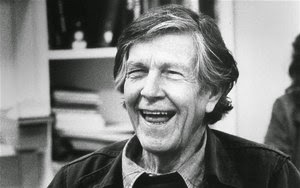 
John Cage performing on Nam June Paik's TV special called 'Good Morning Mr. Orwell' from 1984. In the beginning, we see that Cage is joined by Takehisa Kosugi and one other unidentified person. perhaps they were performing a composition or improvisation that they would have done during a Merce Cunningham dance. there is also a cut away to a Joseph Bueys piano performance art piece.


John Cage : "Botanical materials make lovely sounds when they're amplified. I like the cactuses where the spines are separated, When they're close together they don't vibrate freely." - N.Y./Region, The New York Times